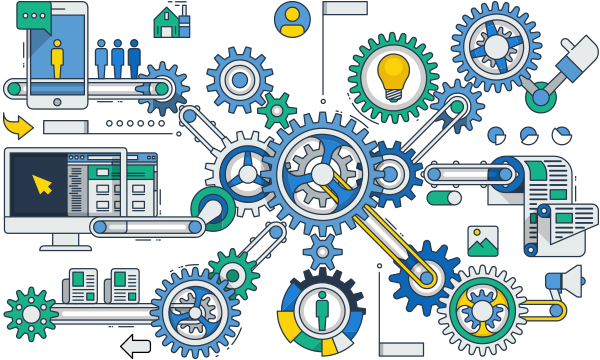 President Trump continuously makes empty promises about how to make the dying industries like coal and American Steel “great again,” vowing to reverse decades of the industry’s downward employment trajectory. Even for someone as bigly as The Donald, it’s still no small order; no matter how much he implies he alone can fix it, he is full of shit. I’m going to introduce another reason why these industries will face an uphill battle: automation.

The problem facing industrial jobs in America isn’t unique: Automation is on the rise and as a result, we are witnessing rapidly reducing employment in mining and manufacturing. Across a wide range of industries, from car manufacturing to computing, robots or artificial intelligence are increasingly taking over roles traditionally performed by humans. And for good reasons: they can work longer hours, don’t require workman’s comp, don’t create unions that protest for better working environments, and cost less than the traditional workforce.

And this didn’t just happen overnight. Automation has been taking peoples’ jobs for a very long time. In 1920, coal mining hit its peak, employing roughly 785,000 people. Since then it’s been on the decline, with the most recent decline starting in the 1980s. During that time, the entire coal industry only employed approximately 242,000 people. By 2000, exactly 15 years before the EPA first proposed the Clean Power Plan’s new pollution guide lines designed to cut emissions from power plants, the coal industry saw a decline of nearly 59 percent of its workforce from 1980 to 2000. So even though Trump loves to claim the EPA is why there are no coal jobs, it just isn’t true. The reason there are no coal jobs is because machines are doing that work.

One solution to the aforementioned problem is called Basic Income. Basic income is a stipend given to the people by the government with no strings attached, just for being human.

Chris Agnos has said, “A universal basic income (UBI) – an idea in which the government replaces all other forms of monetary assistance (welfare, social security, etc.) with yearly stipend – has enormous potential to radically transform our current unsustainable consumer economy based on individual ownership into a much more sustainable economy based on access, but only if it is designed and funded carefully. Implementing a UBI would require a cultural shift in our attitudes towards work and money, but in a world where money is access, the idea of granting everyone enough money to meet their basic needs has sound philosophical logic behind it. However, all of this potential is highly dependent on the way a UBI is funded. A poorly conceived plan may wind up doing far more harm to a society already ravaged by class divisions and extreme inequality.”

I agree with him. A UBI is an amazing idea, but if poorly funded by, say, an income tax or by forcing someone else to directly pay for it, the plan would be ill conceived and potentially dangerous. In Chris Agnos paper he outlines his idea for funding a basic income. He proposes that no one should own things that humans don’t create, like land, air, water and money, and we should attach an “exclusivity fee” or rent-fee to those things (which we already do, like property taxes). He claims that because humans didn’t create it, they should all be part owner in those things. In the United States, the value of all the land (just the land itself, not the buildings or roads that were made from human labor) is estimated to be valued at $23 trillion. A five percent “exclusivity fee” would generate $1.15 trillion annually.

That’s a really good idea. But how are you going to convince the landowners that they, in fact don’t own their land anymore? For the Native Americans of the past, that would have been easy, They couldn’t even fathom land ownership. But in today’s world, land ownership is ingrained in our society and would probably have to be taken by force, which would cause a potential rift and class division.

One of the things Chris Agnos proposed was the idea that no one really owns the concept of money. In America, money is loaned into existence. Currently Americans are paying $300B a year in interest owed to the Federal Reserve. So essentially the Federal Reserve, a privately owned organization, is siphoning off value from the American people when they don’t have to be. What if we made a new type of money. Money that’s inflationary mechanism is tied directly to the people in the form of a universal basic income. So at various intervals throughout the year, the people would get their stipend partly in the form of NEW, freshly minted currency. This method is advantageous, because no one person is footing the bill for another, and because everyone is sharing a little bit of their own purchasing power to give the new minted currency value.

If we combined a better monetary inflation model, with Chris Agnos’ proposal of rent fees, and rerouting interest paid on value transactions, then a basic income would certainly be. not only achievable, but sustainable and in everyone’s best interest.